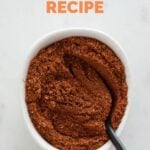 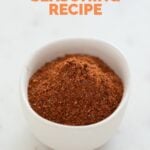 This Old Bay seasoning recipe is made with just 7 ingredients, in less than 2 minutes and is a great substitute for the original blend.

Whether you can't find it in your area, or you want to make your own spice blend at home, this Old Bay seasoning recipe is for you! It's made with only 7 ingredients you probably already have at home, and all you need to do is combine them in a bowl or jar.

The original seasoning is a mix of celery salt (which is made of salt and celery seed), spices (including red pepper and black pepper), and paprika. There are other spices that may be used like laurel leaves, mustard, cardamom, cloves, and ginger.

Old Bay seasoning is named after the Old Bay Line, a passenger ship line that plied the waters of the Chesapeake Bay from Baltimore to Norfolk, Virginia, in the early 1900s. Later, in 1939, a Jewish-German immigrant named Gustav Brunn started the Baltimore Spice Company.

The seasoning is used to season crab, shrimp, and fish, but also as a topping on popcorn, salads, eggs, poultry, French fries, tater tots, corn on the cob, dips, baked potatoes, potato salad, potato chips, and guacamole. I use it to make my beer-battered vegan fish and vegan shrimp (recipes coming soon!).

How to make this recipe

You’ll find the complete recipe with measurements in the recipe card below.

What is Old Bay seasoning?

It's a mix of celery salt , spices (including red pepper and black pepper), and paprika. There are other spices that may be used like laurel leaves, mustard, cardamom, cloves, and ginger.

Is Cajun and Old Bay seasoning the same?

They have differences, but they can be used interchangeably in many cases. While the two include some of the same ingredients, the original Old Bay uses more spices and has a celery salt base. Cajun seasoning concentrates on paprika and usually has more heat.

How you can store it?

Store it in an airtight container in a dark, cool place for up to 1 year. However, if you use fresh herbs, it will last for only 6 months. Never store spices near the stove because the heat causes them to lose potency more quickly. Sunlight can affect the flavor as well.

Did you make this recipe? 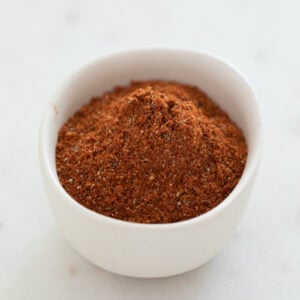 This Old Bay seasoning recipe is made with just 7 ingredients, in less than 2 minutes and is a great substitute for the original blend.
5 from 1 vote
PRINT PIN RATE
Course: How to
Cuisine: American
Diet: Vegan
Prep Time: 2 minutes
Total Time: 2 minutes
Servings: 11 teaspoon
Author: Iosune

Prevent your screen from going dark