Paella is one of the most famous Spanish dishes and it's one of my favorite ones too because I really love rice. This is not the traditional recipe because is a healthier vegan version, but it's quite similar and it tastes amazing, you need to give this awesome paella a try.

Use the veggies you want, I use different ingredients every time I make paella, it depends on the season or the vegetables I have in my kitchen. Sometimes I add seaweed too, like wakame or nori. Seaweed is a great fish alternative and it's also full of minerals.

Traditional paella is made with chicken or fish broth because it isn't usually vegan, but I've used this super easy to make vegetable broth, it's healthy, delicious and so simple. When I don't have vegetable broth I rehydrate dried seaweed in hot water and use this water to make the paella. If I don't have seaweed neither, I use water, but I never use store bought vegetable stock or stock cubes because they are full of unhealthy ingredients like monosodium glutamate.

I've used fresh and frozen veggies, but if you can use only fresh ones, good for you! Frozen vegetables are so convenient, cheap and you can eat veggies that are not in season.

Paella is usually made with Bomba rice or short grain rice, but I prefer to use Basmati because it has a lower glycemic index. Brown rice is a great alternative too, but it takes much longer to cook, although is healthier.

To get the beautiful yellow color you can use saffron or turmeric powder. Please don't use food dyes, turmeric is also really cheap and it's much healthier. Traditional paella is made with saffron, but it's more expensive than turmeric and also less easy to find, but you can use both. I've used paprika too, because I love how it taste, but it's optional.

I've used a paellera to cook my paella, it's a pan, traditionally round, shallow and made of polished steel with two handles, but you can use a regular pan or even a pot.

When you cook paella you don't have to stir the rice unlike risotto, but sometimes I do if rice sticks to the bottom of the pan, actually, there is usually a layer of toasted rice at the bottom of the pan, called socarrat here in Spain. It tastes amazing, but it's toxic and you can find benzopyrene in it, which is a dangerous carcinogen.

Vegan Spanish paella is really delectable. It's also cheaper, lighter and healthier than the traditional one. It's typical to sprinkle lemon juice over paella, so you can serve it with some lemon slices on top. Lemon juice is full of vitamin C and helps to detoxify the body. I hope you like this Spanish recipe, ¡qué aproveche! (enjoy your meal!). 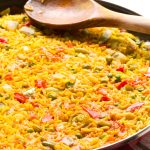 Paella is one of the most famous Spanish dishes. Vegan Spanish paella is delicious. It's also cheaper, lighter and healthier than the traditional one.