Tortilla (or Spanish Omelette) has always been one of my favorite dishes, since I was a child. It's a typical Spanish recipe, probably one of the most famous in our country. We call it "tortilla de patatas" (potato omelette in English) and it's made of eggs, potatoes, olive oil and salt, and some people add onion too. This is a vegan version and it's so delicious, you won't even notice the difference! Traditional Spanish Omelette is made with potatoes fried in olive oil, it's really yummy, but it's not very healthy, so we're gonna share with you the traditional recipe and a healthier version, that only requires two tablespoons of oil.

Here in Spain we always use olive oil for cooking, but you can also use whatever oil you like. I love olive oil, I couldn't live without it! We've used gram or chickpea flour with cold water instead of eggs, it's really cheap, simple and easy, and it tastes amazing. There are other alternatives to substitute the eggs but this is our favorite. This recipe is gluten, soy and dairy free and it's also vegan, requires 6 ingredients, or 5 if you don't want to add onion (but I really recommend it!). Have you ever tried tortilla or Spanish Omelette? It's really tasty, you're gonna love it! 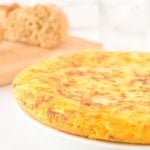 Tortilla (or Spanish Omelette) is a typical Spanish recipe, probably one of the most famous in our country. This is a vegan version, so delicious!