Eggplant with molasses (berenjenas con miel de caña) is a typical Spanish dish you can find in the south of Spain. The traditional recipe is vegan (yay!), but if you're vegan, you need to be careful because some restaurants use honey instead of molasses.

The recipe is so delicious, but isn't healthy at all because it's made with refined white flour and the eggplant is fried. This version tastes amazing (although the original recipe tastes better) and is much healthier.

You only need 5 ingredients to make this recipe: an eggplant, sea salt (optional), flour (I used buckwheat flour, but you can use your favorite), extra virgin olive oil and molasses. It's really easy to make and the eggplant is baked instead of fried. Molasses is a vegan alternative to honey and it's so delicious, but you can also use maple syrup (or any other syrup) if you want. Maple syrup is my favorite sweetener, but I prefer to use molasses to make this recipe. I used a mandolin to slice the eggplant because is super easy to use and the slices have the same thickness, so they cook at the same time, but feel free to use a knife. I poured some extra virgin olive oil on top of the eggplant slices, they taste better, but you can remove this step if you want to avoid oil, although the recipe will taste better if you use it.

Have you ever tried eggplant with molasses? It's a super delicious dish, you should give it a try! If you make this recipe, don't forget to leave a comment or tag a picture #simpleveganblog on Instagram (or on other social network). 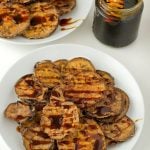 Eggplant with molasses is a traditional Spanish dish. This recipe is healthier because the eggplant is baked and it's made with buckwheat flour.